The original London Bridge railway station was opened in 1836, one of the first in the world and the first and oldest of the current London railway termini. Since 1836, the station has had a complex history, involving frequent rebuilding and changes of ownership.

Water seepage is a common occurrence with masonry arches, of which there estimated to be over 250,000 in the UK. In many cases, these represent high value retail areas.

However, there is a potential conflict between preserving their heritage ambiance and achieving suitably dry conditions. Broadly speaking, the traditional 'drying out' solutions are intensive grout injection, which is expensive and unpredictable in outcomes, and internal canopies and linings that collect and hide ingressed water. 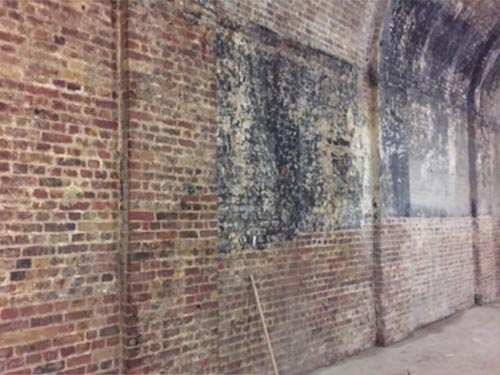 Epicuro Permbloc was used over a 240 square metre area of the arches to prevent water seepage. Epicuro Permbloc is an intensive moisture blocker which allows a radically different approach to water ingress management, especially in natural cement bonded masonry, like that at the Station.

This surface applied product minimises or totally eliminates the need for grout injection, whilst preserving the ambiance of heritage masonry. In addition to significant time and cost savings, an important advantage over the use of liners or canopies is that Permbloc halts the destructive lime leaching that they only hide from view.

As confirmed at London Bridge Station, Permbloc is a key element in the Epicuro's 'Moisture Blocking Method'.